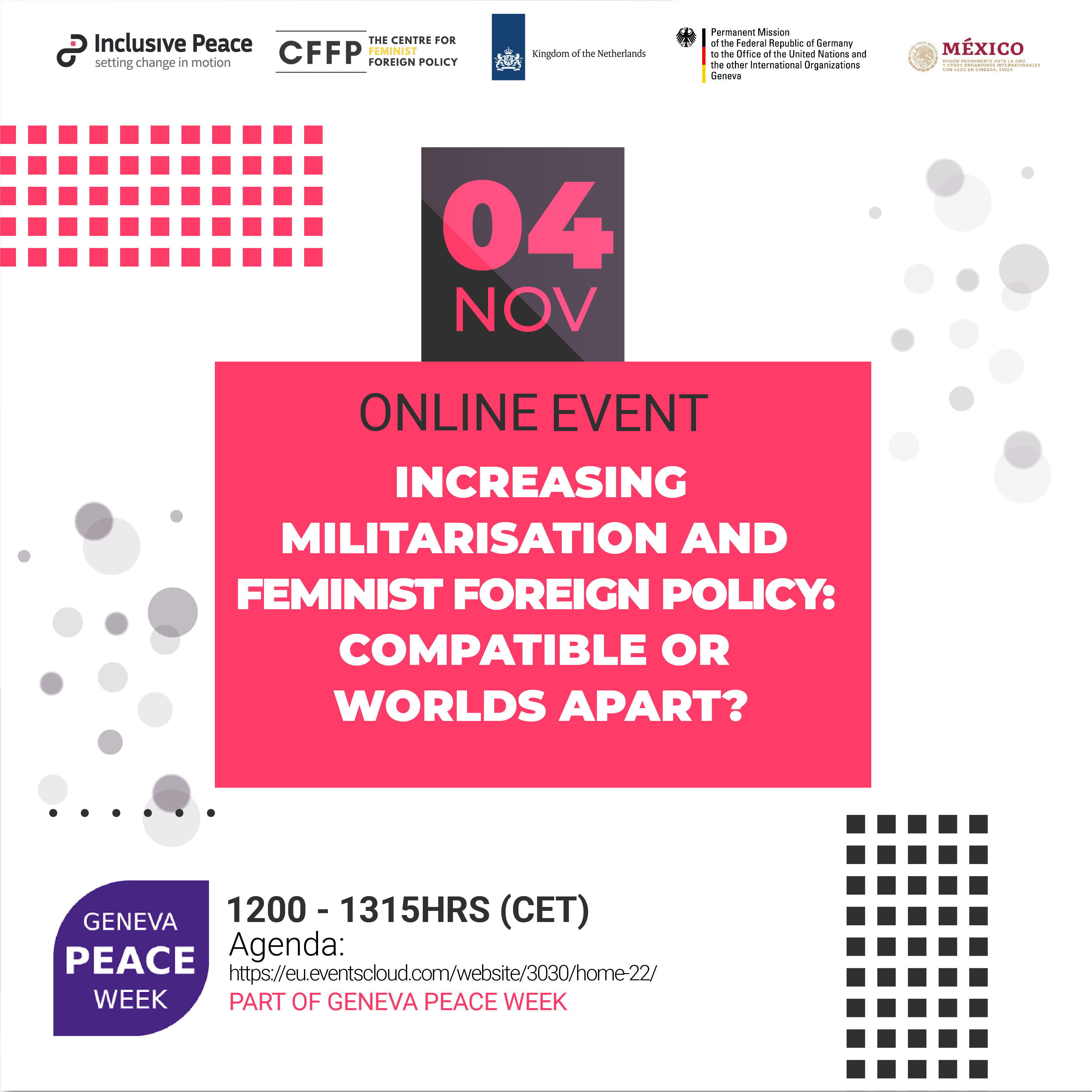 Co-organised by the Center of Feminist Foreign Policy, The Kingdom of the Netherlands, and the Permanent Mission of the Federal Republic of Germany, and Permanent Mission of Mexico to the United Nations in Geneva, this session will explore whether concepts like feminist foreign policy could help to mitigate rising militarisation. It asks whether the two can coexist in the context of international relations and even in the formulation of foreign policy by individual states.

The session will be moderated by Caroline Varin

The meeting link to join the session is:

The Zoom license being used for the event has a maximum number of 100 participants. Participants will thus be admitted on a first come first served basis.

Permanent Representative of Mexico to United Nations Office in Geneva Ambassador Méndez graduated as a BSc in Political Sciences and Public Administration and a MSc in Latin American Studies from the Mexican National Autonomous University (UNAM). She obtained her second MSc in Law and Economics from the Milan State University in Italy. She has diplomas in international politics, public diplomacy and Arab studies, the latter with professors from the University of Oxford. Ambassador Méndez entered the Diplomatic Service of the Mexican Ministry of Foreign Affairs in 1991. Prior to her appointment to Geneva, H.E. Mrs. Méndez served as Ambassador of Mexico to the United Arab Emirates, from January 2017 to January 2022, also covering Iraq.

Co-founder and Co-Executive Director, Center for Feminist Foreign Policy Kristina is the Co-Founder and Germany Co-Executive Director of the Centre for Feminist Foreign Policy, an award-winning human rights activist, and former advisor to the German Federal Foreign Office. She’s been known for her feminist work for several years and been interviewed by and portrayed in numerous (inter)national media outlets. She was named as Forbes 30 under 30 (in both Europe and DACH), is a Handelsblatt/BCG “Vordenkerin 2020”, a Focus magazine “100 Women of the Year 2020", an Atlantik Brücke Young Leader, Ashoka Fellow as well as BMW Foundation Responsible Leader. She is a first generation university student with a graduate degree from Oxford University.